What Are The Protections Of Overload Or Over-current?

Output current decreases about 20% of rated current, shown as curve (a) in the figure below.

Output current remains at a constant level and within the specified range while the output voltage drops to a lower level, shown as curve (b) in the figure below.

Output voltage and current keep pulsing ON and OFF repeatedly when protection is activated. The unit automatically recovers when faulty condition is removed.

Output voltage and current are cut off when output load reaches protection range. 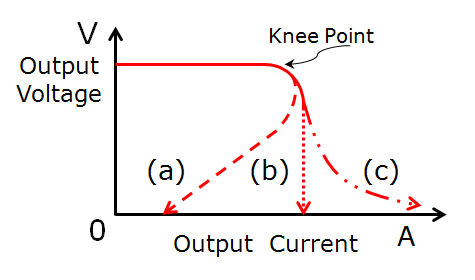 Recover method:
Note：Please do not operate PSU in over-current or short-circuit condition for a long period of time to prevent a shorten lifespan or damaging the PSU. Protection mode of some of the products combines with different types of the forms mentioned, such as constant current limiting and shutdown.
Related Content
Power Adapter
Battery Charger
Company
Service & Recources
Follow Us: